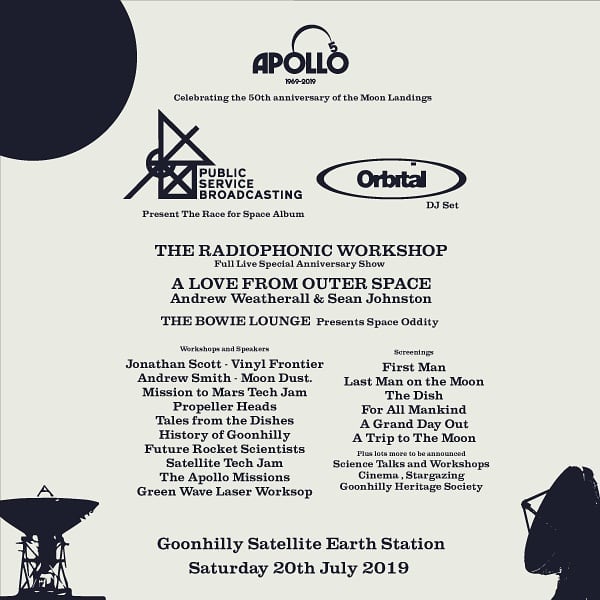 One of Cornwall’s most iconic locations Goonhilly Earth Station staging an event this summer to celebrate the 50th anniversary of the Moon Landing has released further details about the programme of events.

Apollo 50 is a one-off special event on Saturday 20th July that will celebrate this monumental anniversary of history with an educational and entertaining day of music, science, art, and culture.

The Goonhilly satellite communications site based on Cornwall’s Lizard peninsula played a pivotal role in broadcasting the Moon landing. in 1969 and “Arthur”, Once the largest satellite dish in the world signalled the dawn of the space age and named after King Arthur beamed images of the 1969 moon landing to millions of homes around the World.

The first musical acts to be announced to play the event are Art-rock band Public Service Broadcasting who will be bringing their full audio-visual show to the iconic dishes at Goonhilly Earth Station along with dance legends Orbital who will be bringing their famous headtorch DJ set to The Dishes also The Radiophonic Workshop, A Love from Outer Space the brainchild of innovator, DJ and producer Andrew Weatherall and Cornwall’s very own Bowie Lounge.

Joining the celebrations and discussions during the day are a wealth of experts, authors and scientists that have just been announced including Jonathan Scott author of Vinyl Frontier which is all about the making of a Golden Record that NASA fixed to the side of Voyager 1 and Voyager 2 in 19. Andrew Smith who’s mission as the author of Moon Dust gloriously realised in his spellbinding book – is to seek out the last nine moonwalkers and discover how the decades have treated the only humans to have walked on another world.

The Goonhilly Heritage Society will also be holding talking heads sessions with the man who brought the Moon landings to TV screens across the world Pip Greenaway who was one of a small team of operators manning the satellite station at Goonhilly Downs on the Lizard on 20 July 1969. The Heritage Society a group of Goonhilly ex-employees and enthusiasts whose main aim is to preserve, record, and educate the wider public in Goonhilly’ s illustrious past. will run talking heads sessions during the whole day covering the key events that saw Goonhilly become a global icon, reaching its first peak in 2002, facing demise in 2007, achieving re-birth in 2011 and today well on the path to gaining universal acclaim.

Also workshops for all ages are planned including rocket building, interactive laser shows, tech jams, astronomy, all which are free to attend.

Event Director Alec Short said “Goonhilly’s iconic dishes, the history of the site and its plans for the future makes this such an exciting venue to stage an event at. To have Public Service Broadcasting performing ‘Race for Space’ , Orbital and The Radiophonic Workshop in the vicinity of these giant dishes will be an almost immersive unforgettable concert experience…”

Please note there will be no camping or parking at Goonhilly Earth Station but the event will have car parks and a basic campsite nearby that will be linked by a Park & Ride service.
from the events website apollo50.co.uk