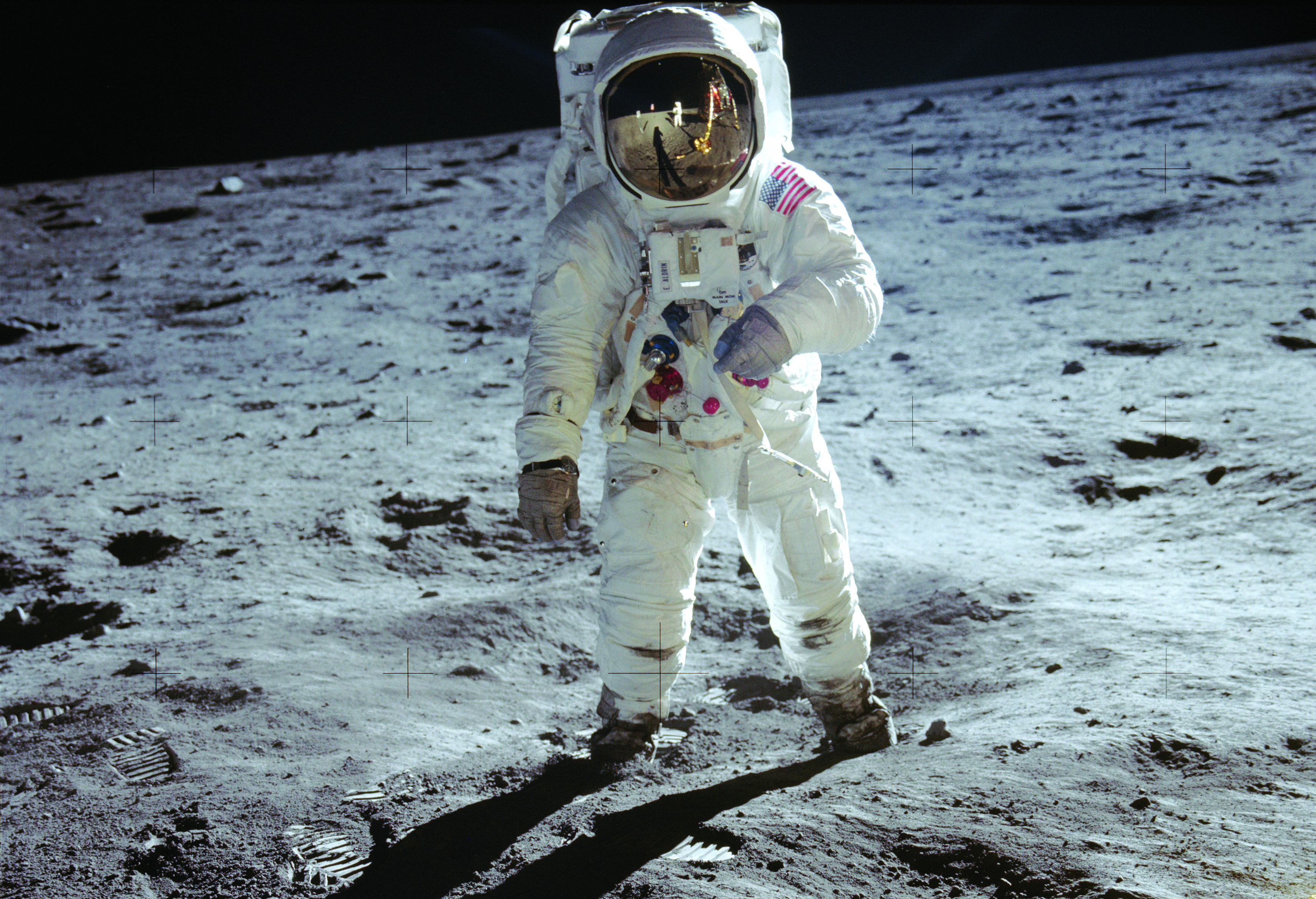 Fifty years ago, the first two humans landed on the Moon, made possible by a team of more than 400,000 men and women here on Earth.

Apollo 11 launched on 16 July 1969 from the Kennedy Space Center at 1:32pm (GMT or UTC). Inside the top of the Saturn V rocket sat the three Apollo 11 astronauts; Michael Collins, Buzz Aldrin and Neil Armstrong. Just twelve minutes after launch the rocket entered Earth orbit. After one and a half orbits they set off for the Moon.

After three days of travel, astronauts Armstrong and Aldrin climbed into their spacesuits and began checking the lunar landing module, The Eagle, to make sure everything was working perfectly. A hundred hours into their flight, Armstrong and Aldrin carried out final preparations, undocked The Eagle, and set off towards the Moon’s surface. Michael Collins remained behind in the space craft in orbit around the Moon, ready to dock with them when they returned. As they neared the Moon’s surface, Neil Armstrong had to take manual control of The Eagle to find a safe place to land. They landed four miles away from the planned landing site, near the Sea of Tranquillity, with only 25 seconds of fuel left. The first words relayed back to Mission Control in Houston after the craft had landed were “Houston, Tranquility Base here. The Eagle has landed.”

Although Armstrong and Aldrin were scheduled to sleep after landing, they (unsurprisingly) decided to prepare for their Moon walk instead. At this point, no one knew how solid the surface of the Moon would be to walk on, and if the craft or astronauts might sink into it as they stepped out. Six hours after landing, Armstrong stepped out onto the Moon’s surface, declaring: “That’s one small step for [a] man, one giant leap for mankind” Aldrin joined him 20 minutes later. Although Neil Armstrong had the brilliance of being the first human to step on the Moon, most of the photos we have of the first Moon landing are of Buzz Aldrin, as Neil was the one holding the camera.

Back here on Earth, on July 20 – 21 1969, over 500 million people around the world watched the TV broadcast as Neil Armstrong took humanity’s first step on the Moon.

The Moonwalk was broadcast on TV and reported in local and national papers around the world. Neil Armstrong stepped onto the Moon in what was the middle of the night in the UK (3:56 am on the night of 20th – 21st July) and 10:56 pm on the 20th in America. Communications were very different back in July 1969. There were only two TV Channels (BBC1 and ITV) and both were broadcast only in black and white, TVs were expensive and many families in the UK rented their sets. Yet humans had managed to get to the Moon and broadcast the images to the Earth!

In the UK images were relayed to BBC London via Goonhilly Satellite Earth Station in Cornwall. Many parents woke their children in the middle of the night to see it live. If there wasn’t a TV in their house, children were carried down the street in their pyjamas to a neighbour’s house to watch it. It was also the very first overnight British TV broadcast.

The first images were grainy and hard to make sense of, especially for younger children but most people heard Neil Armstrong’s famous words “That’s one small step for man, one giant leap for mankind”. Neil Armstrong himself maintained he had infact said “That’s one small step for a man, one giant leap for mankind”. Armstrong and Aldrin spent a total of 2 hours and 36 minutes on the surface of the Moon. They set up a series of scientific experiments which are still there today and gathered over 20kg of surface samples to bring back to Earth. After this, they fired their engines, rose up above the Moon and re-docked with Michael Collins in the command module in orbit.

Neither had slept much on their long journey but both were able to sleep during their long journey home as mission control took over. The astronauts entered the Earth’s atmosphere at 25,000 miles per hour and friction caused the heat shield to rise to 2760 ºC. They landed safely as planned in the middle of the Pacific Ocean, where President Nixon was on the recovery ship 15 miles away to welcome them home.