The Hall for Gwinear 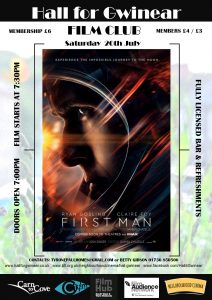 On the 50th anniversary of the Moon landing! A look at the life of the astronaut, Neil Armstrong, and the legendary space mission that led him to become the first man to walk on the Moon on July 20, 1969. Multiple Oscar and BAFTA nominations. Starring Ryan Gosling, Claire Foy, Jason Clarke. Written by Josh Singer (screenplay), James R. Hansen (book). Directed by Damien Chazelle. Moon themed goodies will be served.